THE 2020 MONTESADA IS REINVENTING ITSELF TO BECOME MORE UNIVERSAL THAN EVER!

THE 2020 MONTESADA IS REINVENTING ITSELF TO BECOME MORE UNIVERSAL THAN EVER! 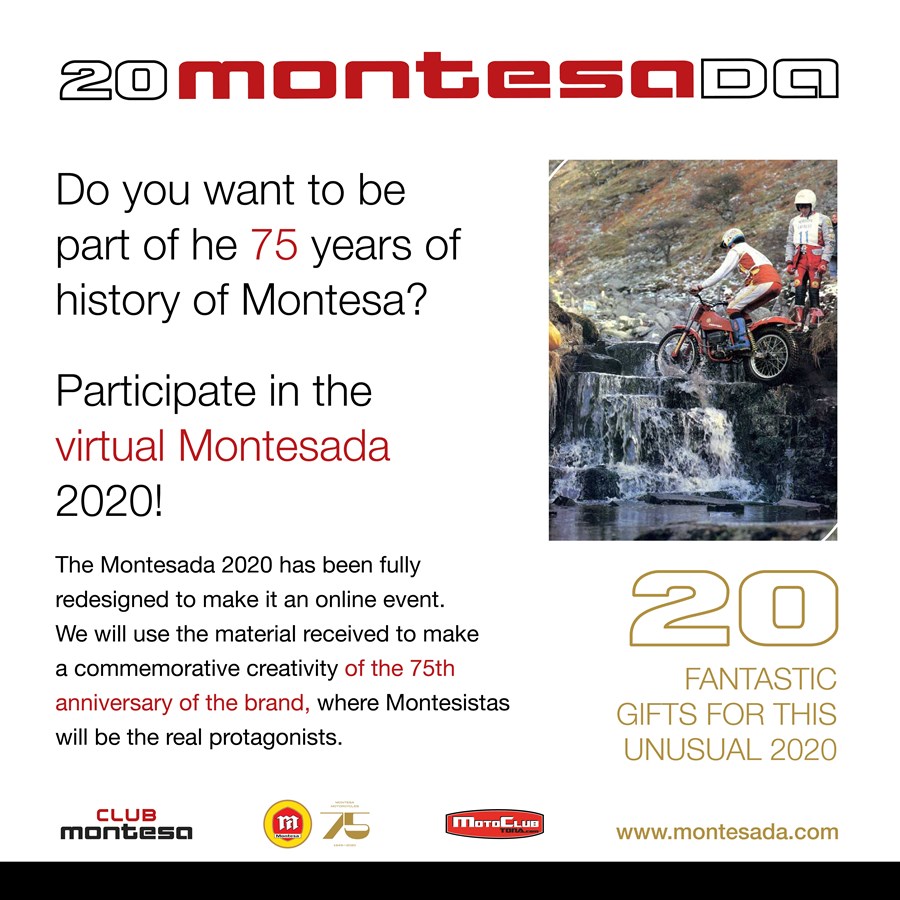 The 2020 Montesada was planned as a very special event, not only because it's celebrating its 20th edition, but because it also coincides with Montesa's 75th anniversary.

Although the health situation has forced the Montesa Club and the Moto Club Tona to cancel the Montesada as we know it, the organizers didn't want to miss out on this very special edition. Thus, in 2020, the event has been completely reformulated to become an online event, which will give it a more universal character, that will make it easier than ever for all Montesa fans to participate, wherever they live.

The way it will work is very simple. From now until November 20th, all fans of the brand will be able to share, in video or photo format, their most special moments with Montesa (whichever the model or reason) through social media using the hashtag #Montesada2020. Furthermore, to make participation even easier, the organization has also considered fans who are not so used to using social media, providing them with a WhatsApp number (633 645 638) to which they will be able to send photos and videos, which will later be published on Montesa's social media with the hashtag #Montesada2020.

Everyone participating in this initiative will automatically become an active part of Montesa's 75th anniversary celebrations, as the brand will make a selection of photographic and audiovisual material to create a special video of the 2020 Montesada and a commemorative 75th anniversary collage, which in turn will become part of the brand's history.

But the surprises and activities don’t end here. All the participants in this online Montesada will also have the chance of winning fantastic prizes, such as trial courses with the Repsol Honda Team and the world champion Toni Bou, copies of the re-edition of the exclusive book 'Montesa, The Art Gallery', vintage Hebo t-shirts, Hebo Montesa shoes, tickets for the exhibition “Montesa, 75 years of an unforgettable adventure”, and VIP passes for the premiere of Montesa's new documentary.

If you are passionate about Montesa, don't hesitate, participate for free in this very special Montesada 2020 and become part of the history of the brand!

PUNCHY V-TWINS WITH A KNOCKOUT OFFER