Share on facebook
Share on twitter
Share on linkedin
Danny Buchan has finished on the podium for the second round running, crossing the line in 3rd place during each Superbike race with his FS-3 Racing Kawasaki Ninja ZX-10RR at Oulton Park over the weekend.

Danny Buchan has finished on the podium for the second round running, crossing the line in 3rd place during each Superbike race with his FS-3 Racing Kawasaki Ninja ZX-10RR at Oulton Park over the weekend. 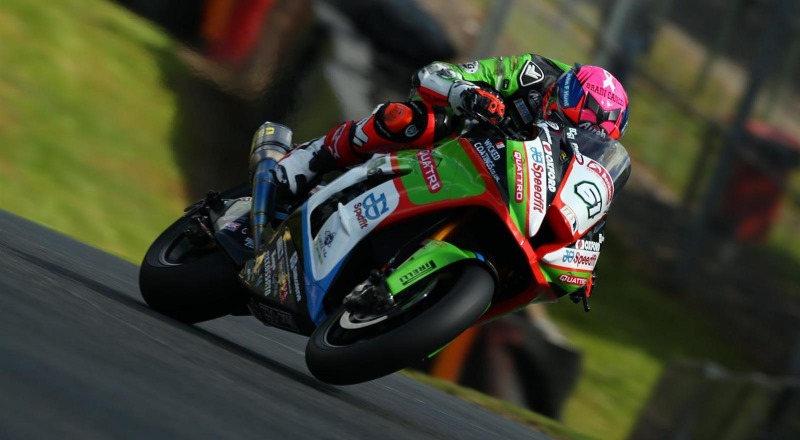 Currently sitting in 3rd place overall on the championship leader board, the 25 year old from Essex is pleased with the result however believes he has more in the tank saying, “Winter testing went well and the Ninja ZX-10RR has been working very well so it couldn’t have gone better with the first podium at my worst track, Silverstone and to top that off with two podiums at Oulton Park was just fantastic. I knew we would have a competitive package after the testing and we put that in to play during the racing over the weekend. The goal was to take two podiums there. I messed up qualifying a bit and I had to start race one from 6th place, so I was held up behind a couple of guys and the front runners had a gap on me, which I couldn’t bridge in the remaining laps. For race two the leaders knew I had good pace, so I had to get a good start but unfortunately I didn’t and so I spent five or six laps trying to pass and get back into third place. By that point, I was gapped a little bit again.”

“Overall it’s been a great championship. 3rd place is strong and for now I am just trying to score as many points as I can so that we can secure a place in the Showdown.”

Team Quattro Plant JG Speedfit Kawasaki are in high spirits for the next battle despite tough qualifying and racing over the weekend. While gaining pace in free practice, 2018 Supersport class runner up, Ben Currie came off and injured his foot in the process, leaving it down to his teammate, Glenn Irwin to fly the flag.

“We made great changes to setup for race two and the results didn’t show our strong lap pace. Glenn went off the circuit twice and still managed to come back strong throughout the race and held a strong lap pace which was similar to the front runners. The team and Glenn have taken the positives from this round and we will now work towards the North West 200 with James Hillier riding our Ninja ZX-10RR and the next BSB round where we can move forward,” Pete commented.

Fresh from a brief spell of Stock racing in the USA, New Zealander, Shane Richardson of team Astro-JJR Racing made a statement when he placed his Kawasaki Ninja ZX-6R on the top step of the Superstock 600 podium, followed by Ninja ZX-6R rider, Eunan McGlinchey of team #109 Kawasaki.

Kawasaki machinery and their riders showed a strong performance in the Superstock 1000 class as well with Ninja ZX-10RR pilot, Lee Jackson of FS-3 Racing Kawasaki reigning in a place just shy of the podium in 4th position.

Round 3 of the 2019 British Superbike Championship is set to take place at Donington Park on 24th to 26th May. To keep up to date with the latest Kawasaki racing news, click here –