Share on facebook
Share on twitter
Share on linkedin
Imagine an all-expenses paid trip to Las Vegas where you become one of the first people in the world to ride the awesome, all new, Kawasaki Z H2 at the Las Vegas Motor Speedway… Sound like a dream? – Well, that was a reality for two of our lucky Club Kawasaki members who I took to the States earlier this year as winners of our “Ultimate Z Test Ride” competition.

Imagine an all-expenses paid trip to Las Vegas where you become one of the first people in the world to ride the awesome, all new, Kawasaki Z H2 at the Las Vegas Motor Speedway… Sound like a dream? – Well, that was a reality for two of our lucky Club Kawasaki members who I took to the States earlier this year as winners of our “Ultimate Z Test Ride” competition.

Read the full story & see the images in the latest issue of Club Kawasaki Magazine – 19. You will need to be a member to gain access so you'll want to join now if you haven't already.

After a competition was launched at Motorcycle Live last year in which customers were asked to submit a thirty second video of themselves telling us why they should be chosen, the eventual two worthy winners were Andy Sharp and Thomas Bell! Both Kawasaki fans (owning a Ninja H2 SX SE+ and Z1000SX respectively), you can imagine their excitement of being invited to this memorable event. When The Kawasaki chaperone arrived early one Monday morning in February at Heathrow airport, they found two very eager Club Kawasaki members desperate to find out what exactly we had in store for them…

Andy Sharp – “I just couldn’t believe I had won! I’m such a huge Kawasaki fan, and had never been to Las Vegas before, so to combine the two and get to experience behind the scenes of an event not normally open to the public was just fantastic!”

Thomas Bell – “The chance to ride a Supercharged motorcycle on a banked circuit was out of this world! Kawasaki UK and Kawasaki Europe put on such an awesome event, it’s something I will remember for the rest of my life!”

Worldwide new model press introductions are usually for members of the motorcycle press only and produce the images and articles you read in publications such as Motorcycle News, Fast Bikes magazine etc. However, for the first time ever customers of ours from across Europe were invited to join the final group of this historic event and truly experience what it was like to become a journalist for a few days. Thomas and Andy not only got to ride the new machine alongside the journalists, but experienced everything that goes on at a launch from meeting the Z H2 Japanese Project Leader to having direct access to a technical team tending to their every need as the machine was set up just for them.

It wasn’t all about the bikes though, of course they needed a little R&R to acclimatise to the time difference! So Kawasaki set about taking the guys on a tour of the famous Las Vegas strip, visiting Fremont Street, experiencing the New York New York rollercoaster and we even squeezed in a memorable helicopter ride over the sensational Grand Canyon! Suitably relaxed, they arrived at the awe inspiring Las Vegas Motor Speedway ready to feel 200BHP of Supercharged excitement. Not content with just providing this riding experience, the track also happened to be right next to a US Airforce base, meaning that the riders were treated to the full Top Gun experience of riding bikes with fighter jets flying overhead!

The Z H2 really is a bike for many different types of rider, as Andy and Thomas found out. Just as capable on track as it is on the road, whilst a Supercharged 200BHP sounds intimidating, they found out it really isn’t.

Andy Sharp – “What a day! I had never ridden on an oval track before, but I want to again! The Z H2 is fantastic, so fast when you want it to be, but really composed too. It handled both the slow speed and high speed sections with ease. I want one!”

Thomas Bell – “The mid-range power this bike has is phenomenal, it makes it so easy to ride with minimal gear changes, even though you actually want to change gear with both the super smooth quickshifter and beautiful chirp chirp sound of the Supercharger resonating through your helmet!”

Kawasaki whisked the guys back to the Mirage Hotel and a couple of hours were spent on the Roulette table looking back on a brilliant day, whilst hoping the following day would be equally as epic… It was. The Valley of Fire is arguably one of the most breath-taking State Parks in the United States, strewn with beautiful red coloured rock formations. This set the scene for the road riding element, where both Andy and Thomas rode an awesome stretch of winding smooth tarmac, on closed roads, posing for the professional photo and video team as they passed by. Access was then granted to the private Kawasaki website which gave them a selection of stunning images they can show off to their biker friends for ever more! It turned out that they enjoyed the bike on normal roads just as much as on track!

Thomas Bell – “That bike just keeps surprising me! With all the talk about Superchargers and 200BHP, we knew it would be a weapon on track, but out there, at relatively slow speeds on normal roads it works just as well. The route back to the hotel was genuinely the best ride I have EVER had on a motorcycle!”

Andy Sharp – “I have ridden a few track days in my time, but most of my riding is done on the road, so as much as the Speedway was amazing I was really keen to try out the Z H2 on the road. Due to the strict rules in the State Park, the speed limit was quite slow, but it just enabled us to really zone in on what the bike was doing and how it worked at a more sedate pace. It was a dream to ride through such beautiful landscape on such a well behaved machine. Can we go back please?”

All that remained for the two lucky guests was a ten hour flight back home to the UK, but they had had the time of their lives! It was a first for Kawasaki to invite customers to such an event; will we do it again? That remains to be seen, but one thing is for sure, Thomas and Andy are left with lifelong memories! The new Z H2 is an amazing bike, just ask the guys, but why don’t you go one step better and try one for yourself by heading to www.kawasakitestride.co.uk and booking a test ride with your local Kawasaki dealer? Ok, so it won’t be in Las Vegas, but trust us, you’ll love it. 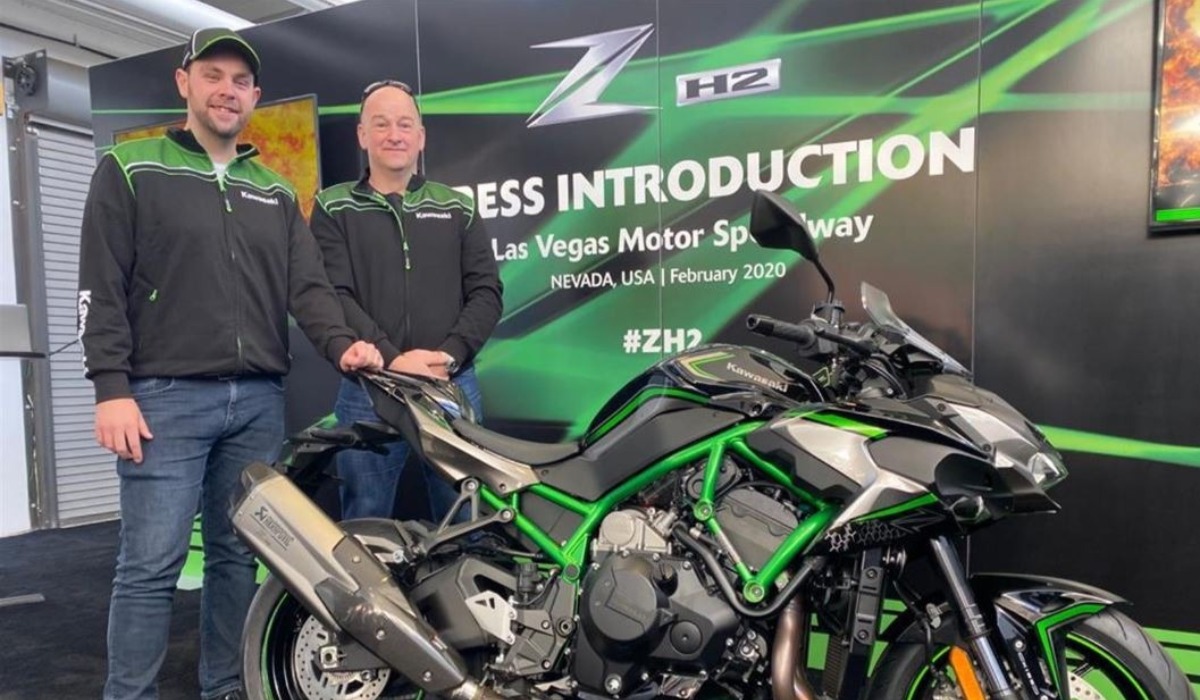