After indicating earlier this month that a new GSX-S1000 was on the way, Suzuki has now released details of the 2021 naked. 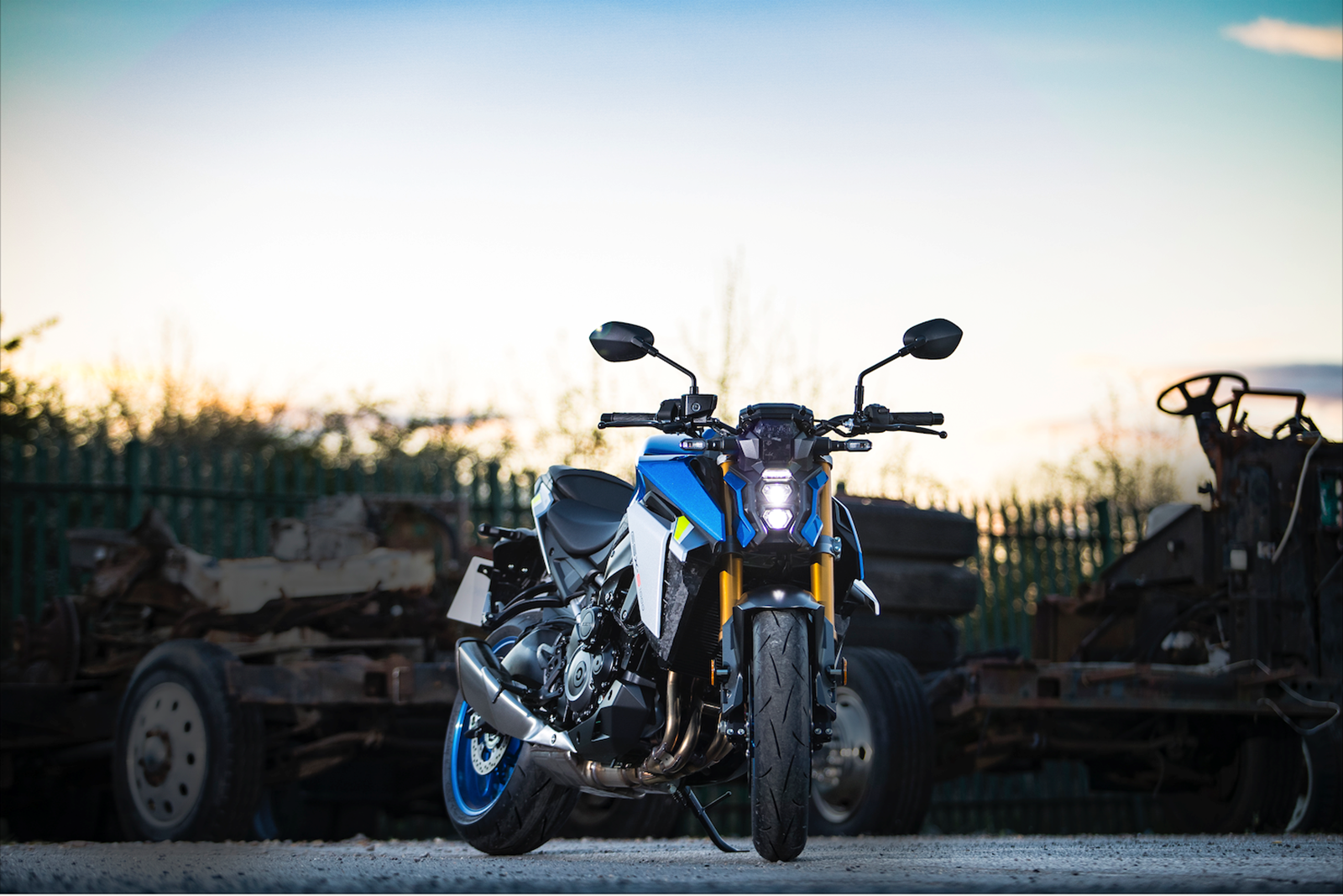 After indicating earlier this month that a new GSX-S1000 was on the way, Suzuki has now released details of the 2021 naked, which comes with: 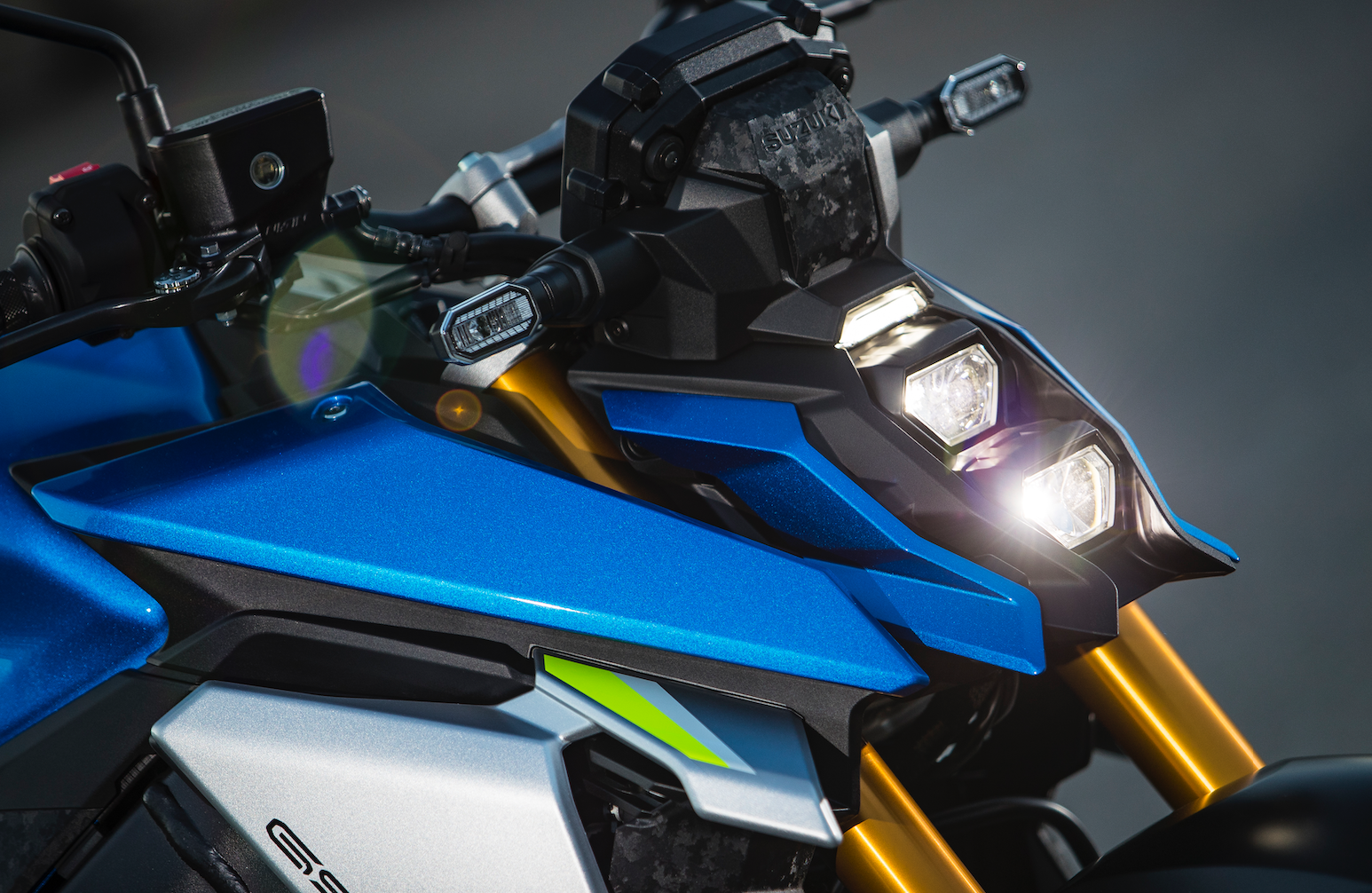 Immediately obvious is the new GSX-S1000's redesigned aesthetic; the bodywork and lighting is completely new, with a focus on sharp, angular, aggressive lines and a powerful stance, with a ‘mass forward’ demeanour.

Arguably the most striking visual change is the new, vertically stacked LED headlight. As well as the practical benefits of a new mono-focus LED light source that displays a wide, bright light, the new design of two stacked hexagonal units topped by LED position lights creates a look that is lighter and tighter, and aids the desire for a more aggressive pose. There’s a new LED tail light, too, with both flanked by LED indicators. 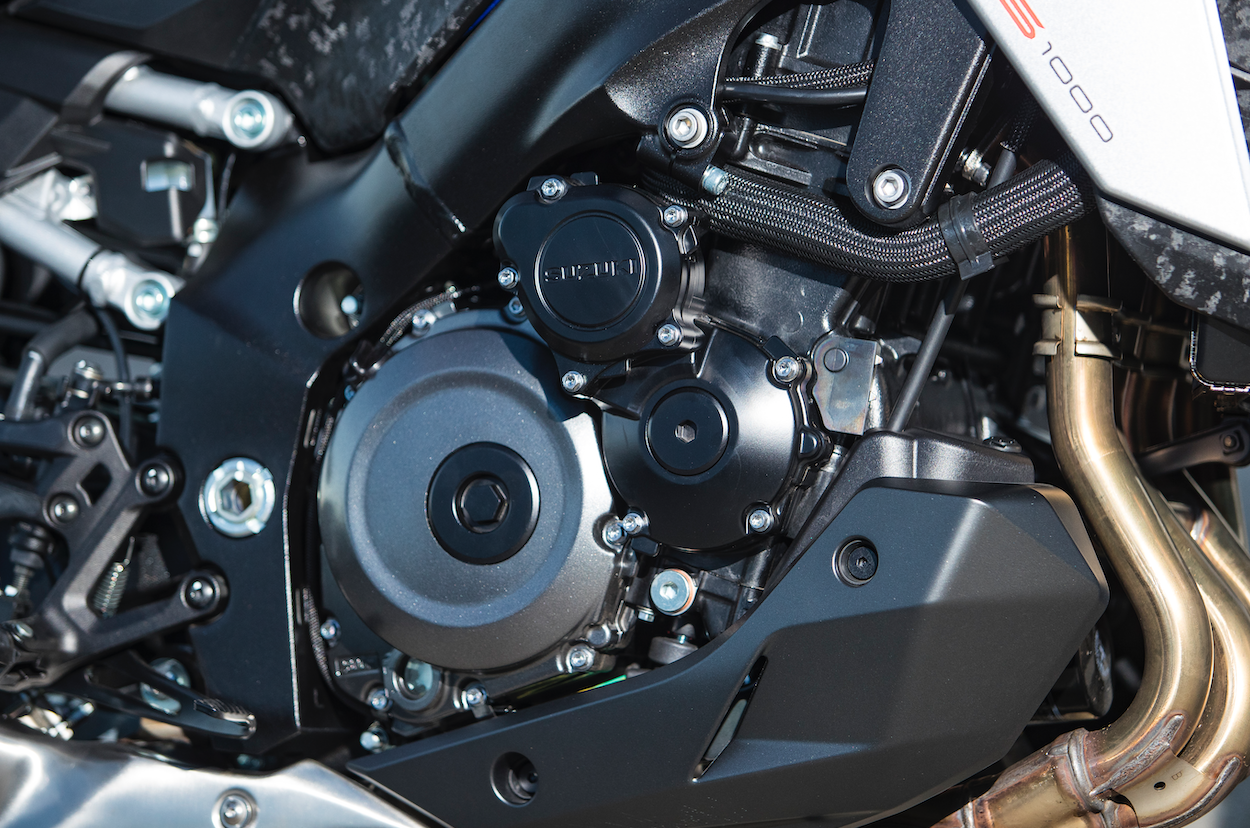 The inline four-cylinder engine in the 2021 GSX-S1000 produces more power and a broader spread of torque in the lower rev ranges to deliver ideal naked sports bike performance. Changes include a new intake and exhaust camshaft, new valve springs, new clutch, and a new exhaust.

Compared to its predecessor, the new GSX-S1000 makes more cumulative torque across the rev range, filling in the dips in the graph with a flatter curve. It revs on to provide increased top end power, too, with peak power 152PS at 11,000rpm.

Thankfully, a new exhaust retains the soundtrack the outgoing model was known for, while aiding in the increase in power and the meeting of Euro 5 emissions requirements with an additional catalytic converter.

Added controllability and increased performance also comes thanks to Suzuki’s Clutch Assist System. The slipper clutch partially disengages to reduce negative engine torque and mitigate the effect of engine braking when downshifting from high rpm. This helps prevent the rear wheel from locking up or hopping and provides smoother deceleration, enabling the rider to shift down with greater confidence and maintain better control when downshifting into corners.

Adding an assist function increases the clutch’s clamping force under acceleration and thereby allows the use of softer springs while still efficiently transferring torque to the rear wheel, resulting in a lighter lever operation. 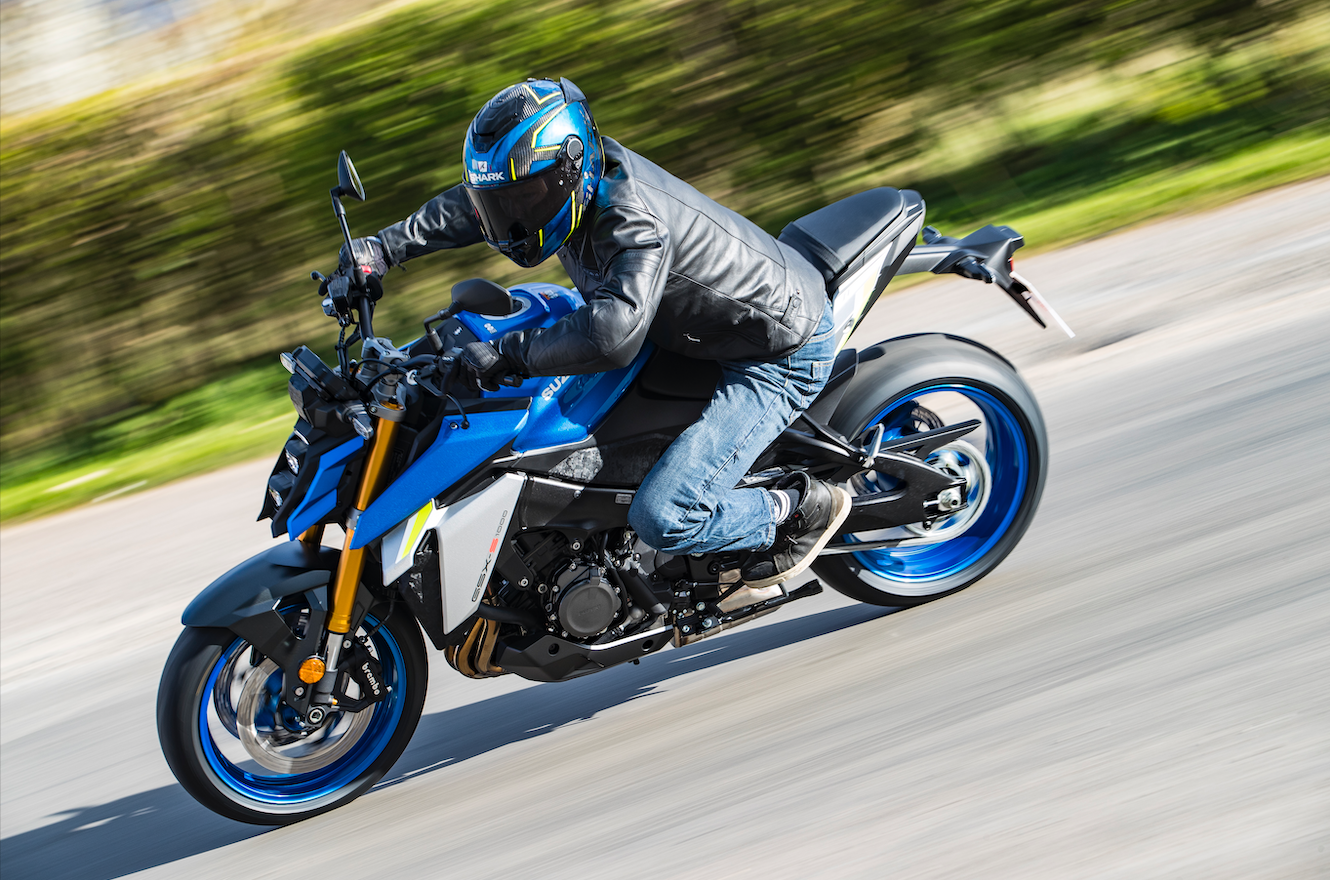 An advancement over the previous GSX-S1000 comes with an updated suite of electronics, courtesy of Suzuki Intelligent Ride System (SIRS).

A new ride-by-wire throttle makes it possible for riders to more accurately and finely control the relationship between throttle actuation and engine response, especially when allied to the new Suzuki Drive Mode Selector (SDMS) system, with which the new GSX-S1000 is equipped.

SDMS allows riders to choose from one of three engine maps, depending on the riding conditions or their own personal preferences. Modes A-C all deliver the same peak power, but vary the sharpness and immediacy of the delivery, with A mode the sportiest, and C mode delivering the softest power delivery.

Performance is enhanced thanks to a bi-directional quickshifter, which reduces the need to operate the clutch during gear changes or close the throttle on upshifts, or blip it on downshifts.

A new traction control system comprises five modes, while it can also be switched off. Inputs from front and rear wheel speed sensors, and crank, gear, and throttle position sensors feed into the ECU which in turn controls the throttle valve opening, ignition timing, and fuel injection rate, to reduce or prevent wheel spin.

All the information is displayed on an updated and easy-to-read LCD dash.

Topping off the electronics package is Suzuki’s always-handy easy start system – which requires only one prod of the starter button to fire the engine – and low RPM assist, which raises engine speed as the clutch lever is fed out, to aid slow speed control and prevent stalling. 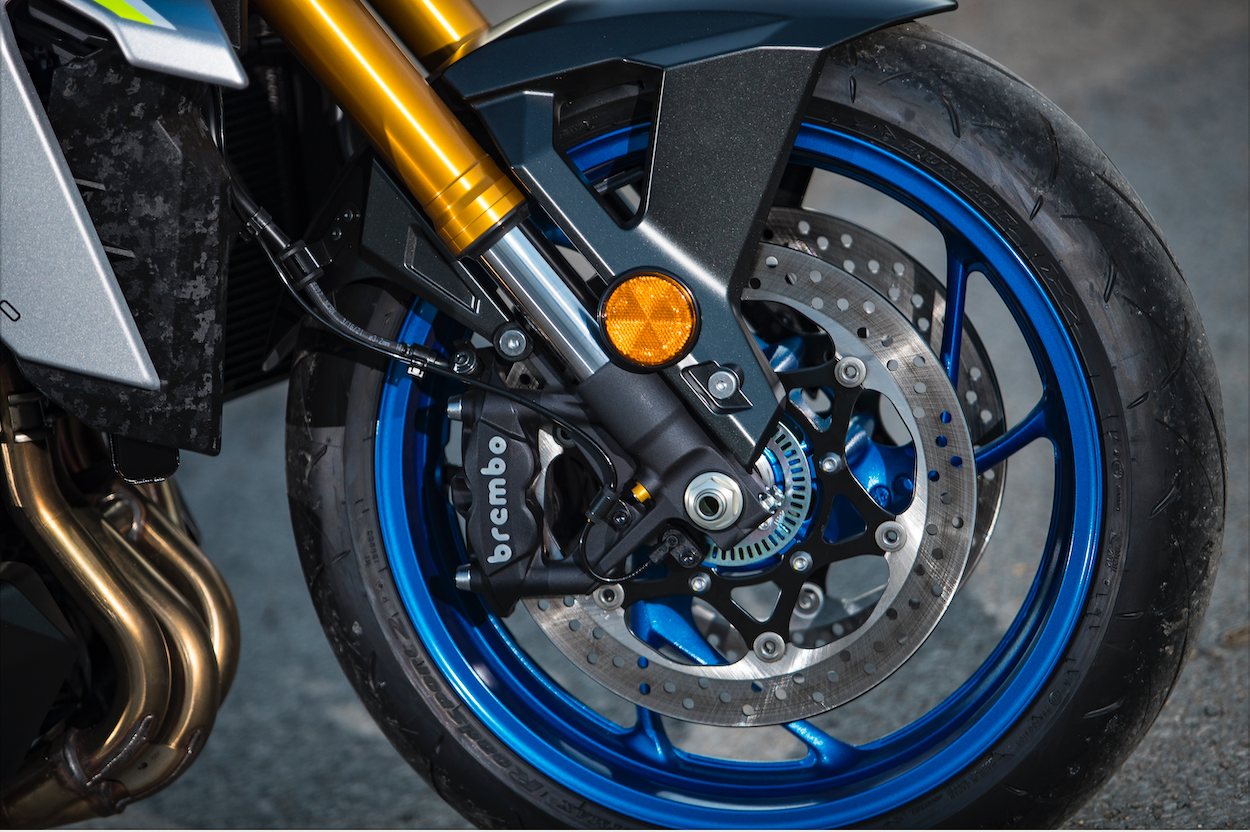 The twin-spar aluminium chassis is mated to a rigid, GSX-R-derived swingarm for agile, sporty performance and handling. New, 23mm wider, tapered ‘bars help riders pitch the bike into turns with greater leverage. They are also set 20mm closer to the rider to improve comfort without compromising handling.

Suspension comes in the form of fully-adjustable KYB front forks and a preload and rebound damping adjustable rear shock, with revised settings from the previous iteration. 310mm front discs are paired with Brembo monobloc calipers.

A larger, 19 litre fuel tank and 46.3mpg equates to a tank range of 194 miles. Those miles can be undertaken in greater comfort thanks to a new seat.

Tyres are custom-engineered Roadsport 2 from Dunlop.