Alex Lowes will remain an integral part of the Kawasaki Racing Team for the coming seasons, having agreed a new multi-year deal that will take him into his third year as an official Kawasaki WorldSBK rider. 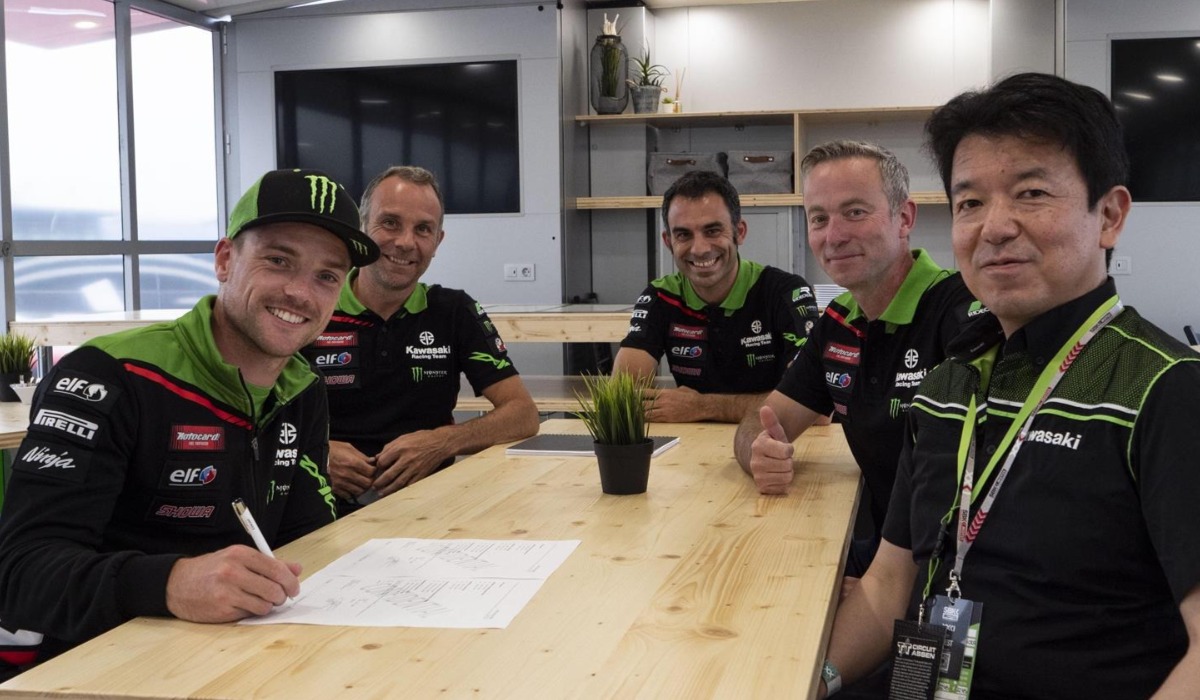 Alex Lowes will remain an integral part of the Kawasaki Racing Team for the coming seasons, having agreed a new multi-year deal that will take him into his third year as an official Kawasaki WorldSBK rider.

The contract signing was witnessed by Mr Masatoshi Yoshioka, Director of Corporate Planning Division, Kawasaki Motors Europe at the recent Assen round of the 2021 FIM WorldSBK Championship, where Alex retained his overall fourth place in the points table.

As well as returning as a full KRT Superbike rider next year Alex will also strengthen his bond with Kawasaki and his KRT squad as he and Jonathan Rea will be joined by 2021 Kawasaki superbike debutant, Lucas Mahias, to compete in the prestigious Suzuka 8 Hours race later this year.

With a race win and seven other podiums to his credit since he joined Kawasaki in 2019 Lowes continues to find a greater affinity with the new Ninja ZX-10RR, his team and his pit crew, led by Marcel Duinker.

Before the 2022 season there is the small matter of the rest of this year’s championship to go. Five rounds have been completed with a further eight to go, depending on local regulations around the global pandemic.

Alex Lowes, stated: “I am really happy to have signed once more with the Kawasaki Racing Team, the most successful team in the current era of WorldSBK.

After a strange first year in the team last year due to the global situation and with such a short season it has been good to start this year at some different tracks and I am understanding the bike a lot more. It has also been slightly frustrating this year because I feel like we started strongly but the results are not quite where we would want them to be right now. We have a lot of potential and I am still in the top four of the championship, close to the top three, which is the target for this year.

I will be working hard for the next few weeks to make that next step to be regularly challenging for the podium. Honestly, I feel like it is close, so with this team and all these guys around me – with the relationships we have been building – everything is in place now to push things forward.

I am really thankful to stay in the team next year, and proud of the faith that Kawasaki has shown in me. In our job there is a lot more that goes on behind the scenes than the results that you see on the track so I am really happy about this new deal with KRT. A massive thanks to all the guys behind the project, to Guim and Biel Roda, Steve Guttridge and all the people at KHI in Japan for believing in me again.”

KRT Manager, Guim Roda, concluded: “Alex started with KRT during the Covid pandemic. He needed to learn quickly and concentrate on making championship points in those first three months; not easy. For 2021 he started the season strongly and we are all working to make those important steps to improve the performance of the overall package.

We are so happy to have Alex and he is highly motivated to continue with the KRT project. With this two-year agreement we are convinced that we will now build on these firm foundations to create the strongest package with him, Marcel, his Crew Chief, the Ninja ZX-10RR and the entire KRT organisation.”

Editors Note: the accompanying image was created within Covid protocols